Hello readers! Welcome back the Moonwisp ISBI Alphabetcy Legacy Challenge. Seriously, what a mouthful. And here I am, already planning to put together another mixed legacy after that one. BUT, I shouldn’t get ahead of myself, I still have about twenty generations of pure retards to go.

Let’s start this one with a kid from generation five aging up. 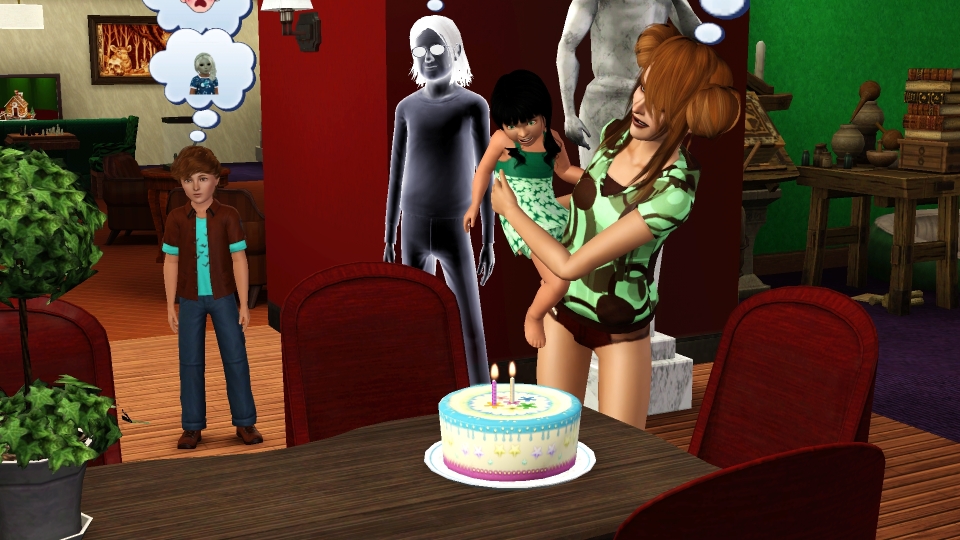 He is quite a bit younger than Dalyra.

After extinguishing her candles, Elika laughed and laughed at Gan for turning into an older man.

It’ll come to you one day, young lady.

Elika: Art must take over the world. Or else I’ll get hysterical. 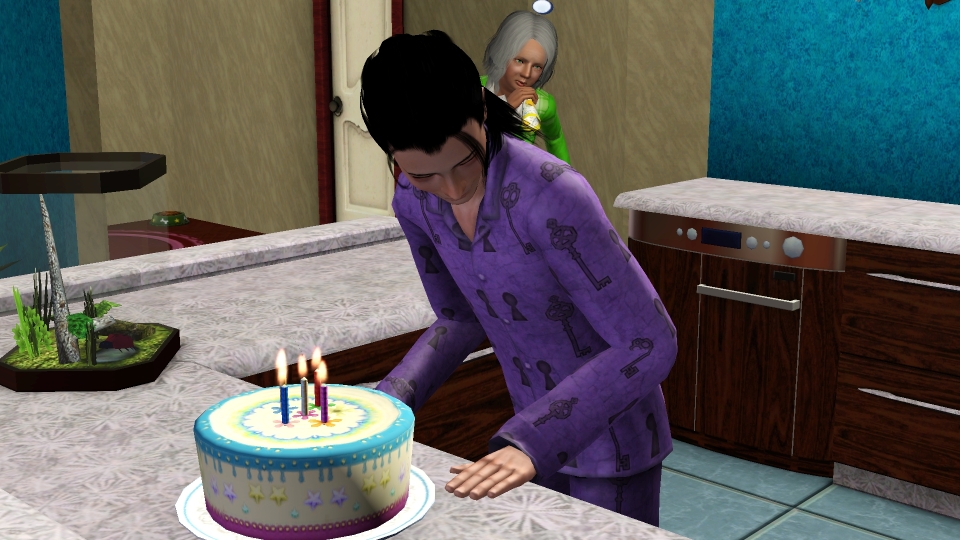 Gan: Stop pretending you like me Bobbi, you fake old bat.

Gan: Is this another alien baby?

He looks like a very tired man for someone who never did anything with his life.

Gan: Moving from your homeland and dealing with Dalyra isn’t that easy.

The family then had cake all together, as if it was something rare.

Cole: I’m sure you won’t mind if I help getting rid of the cake.

Elika gets her bedroom. 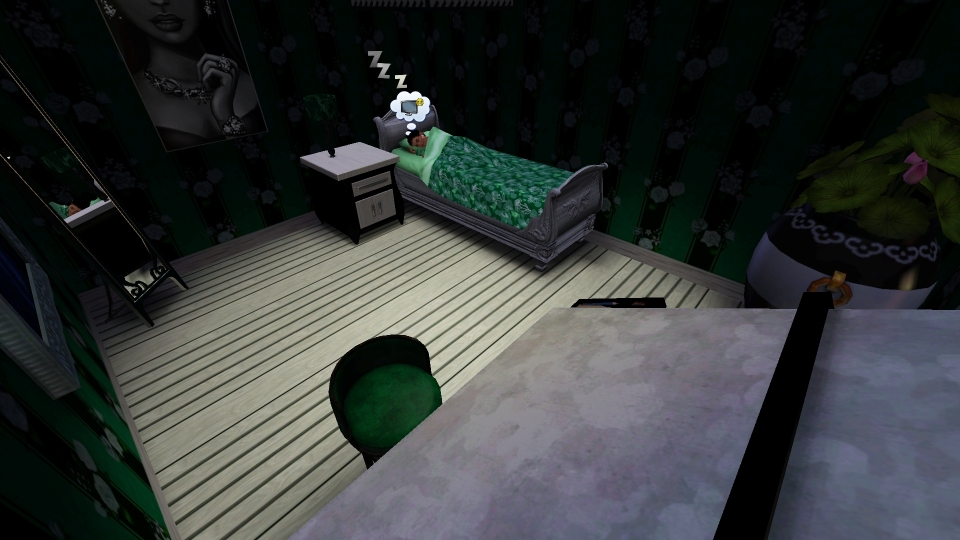 Amazing how so many have been obsessed with green in this family.

Maybe it has to do with the greenish furniture in the nursery where all the babies spend their time? 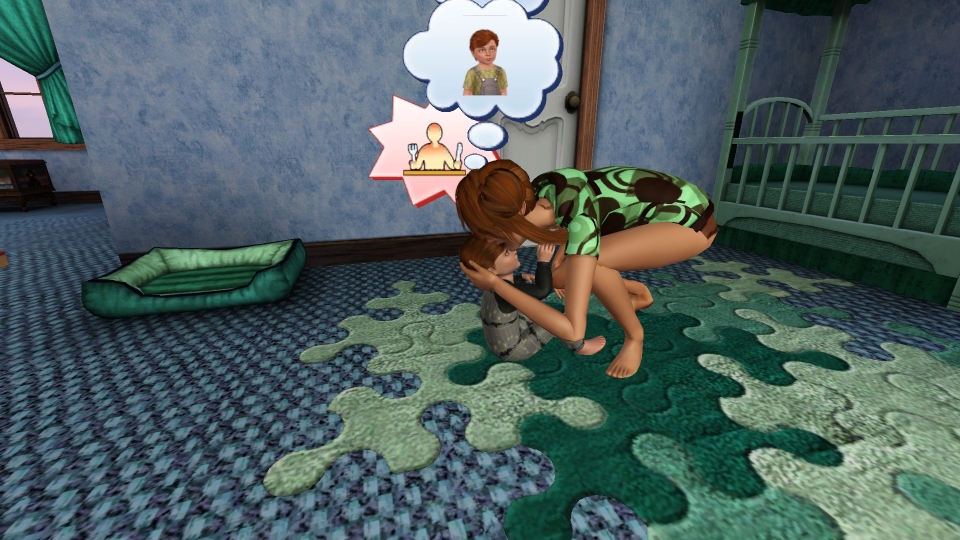 But then, no-one has ever loved blue.

Ethan: So that’s my sister or half-sister?

Elika glared at him, not liking how she has more siblings than she thought to compete with.

Elika: I’ll murder you in your sleep.
Ethan: I’m afraid your threat is empty as you can’t go where I sleep.

While her kids were expressing how much they love one another, Dalyra cared for her garden.

Cole: Hey, where are all my potatoes?

Cole eventually located the remaining potato plants but still weeped over those that were lost.

Dalyra: Seriously Dad? You were still alive when I de-planted them. You didn’t say shit back then.

Once she was done with the garden, which took all day, Dalyra went to visit her siblings.

Dalyra: Duncan invited me. No-one’s home. I should have known. This guy is crazy.

Instead of returning home, she opted for reading some skill books in hopes that maybe they would get there soon.

It also saves her from an evening taking care of kids. 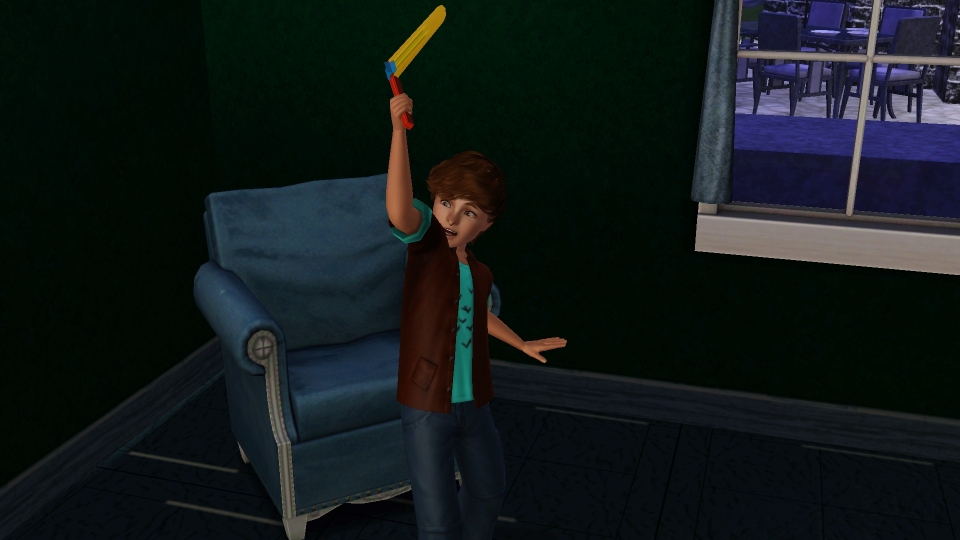 So sorry Elrath, but there is plenty of cake around anyway.

He bursted out in an explosion of sparkles. 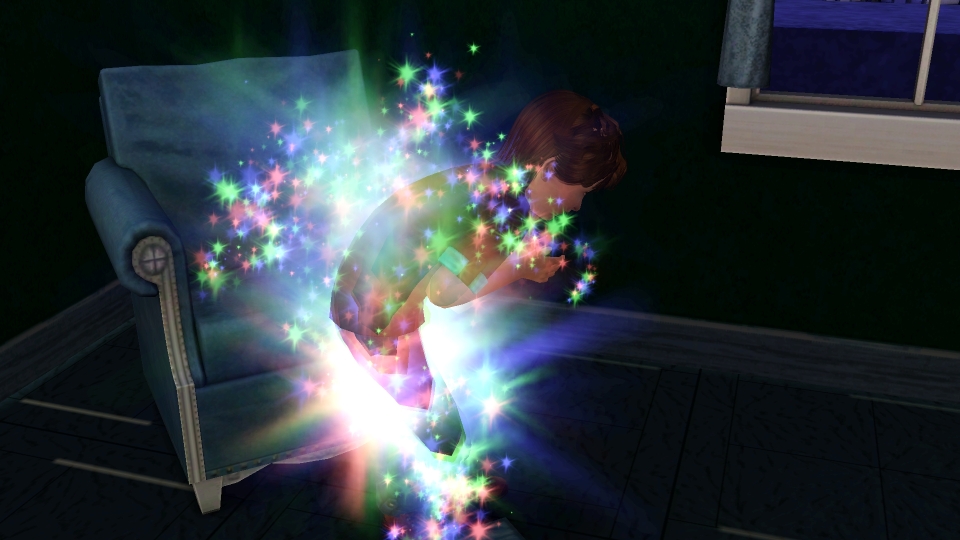 Elrath: This is it! I am finally a Star!

Not quite! But he’s starting to look like one.

Elrath: I can hear the music the gods want me to create. This beat is the bomb.

Elrath rolled Charismatic to go along with his Grumpy, Virtuoso and Star Quality. 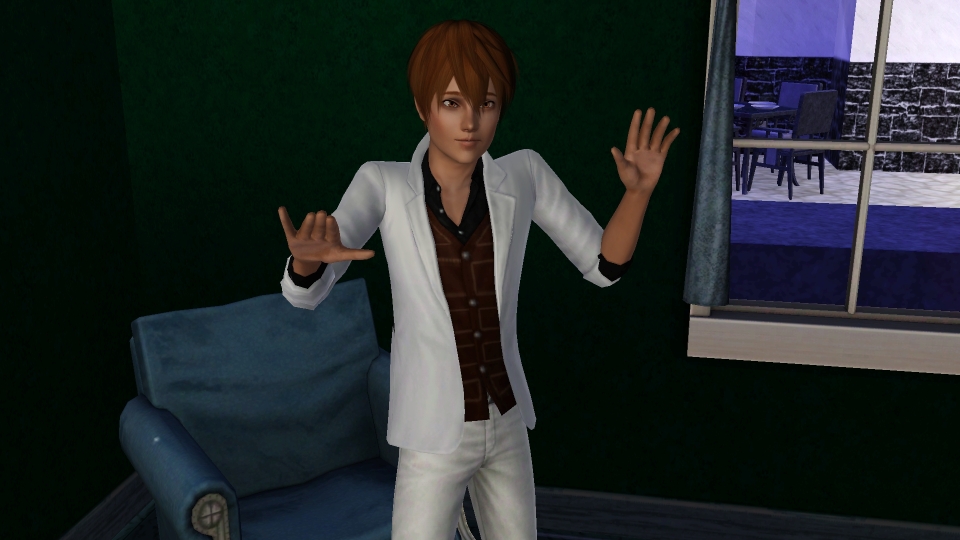 He also looks like he belongs in an anime.

Meanwhile, nobody cared about Elrath an continued on their own business.

Eve played with dolls in the quietness of the nursery.

Elika dutifully did her homework.

Elika: One day I’ll show them art is much more important than this load of garbage.

As for Bobbi, she was just coming out of work when she started floating.

Bobbi: Does that mean I’m finally a Rock Star and I can retire?

Before kicking the bucket, Bobbi actually made it to Pop Icon, which is level 9 of the Music Career, in the Rock Branch.

Bobbi: That certainly looks cool. My fans will love it.

Damien walked out of the theater. apparently he was at Bobbi’s concert.

The Grim Reaper finally showed up and Damien realized what was up.

Grimmy: I mean, why wasn’t I invited to the concert?

Bobbi begged for her life since she would have loved to do more with her life, such as topping her career. 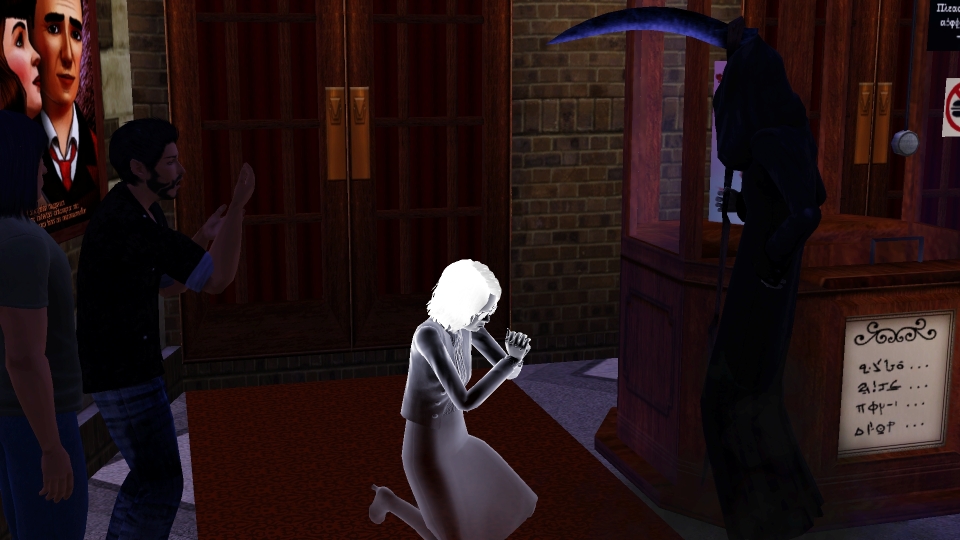 Damien: You can’t just take my mom right in front of me! That’s cruel, man!

Joaquin (Barbara’s son) also witnessed her death and gave his support to Damien.

Joaquin: At least she didn’t die without family and she rests where her heart was?

Even though no-one else saw it, Ethan started mourning his grandmother he only saw during toddlerhood. 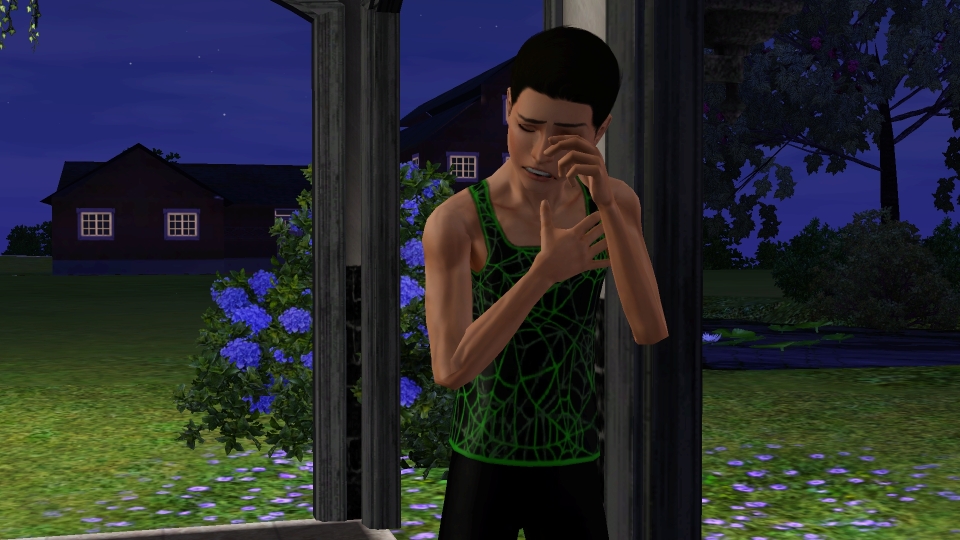 Ethan: I just felt a sudden pain in my heart,

He really shouldn’t be that sad either given that he’s the one with the best chances of seeing her the soonest.

Her grave was moved from the front of the theater to the family mausoleum. As moving as Joaquin’s speech was, her heart lies with Cole more than with music.

The next morning, Elrath woke without a tear, but rather with a smile. 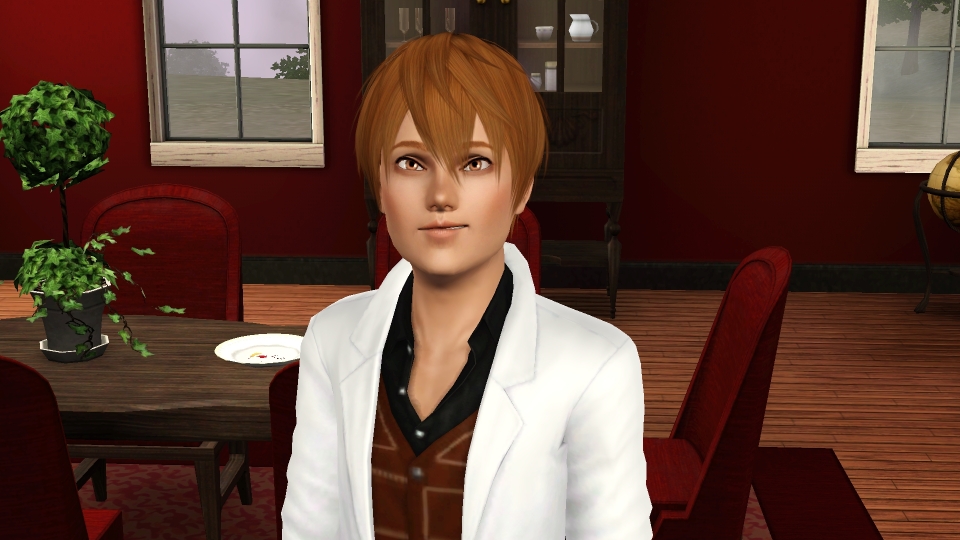 Elrath: She visited me in my dreams and gave me all her secrets to famehood.

Gan, though it was believed he never liked Bobbi, was terribly panicked.

Gan: Now I can’t be useless and leave it all up to her!

That’s right, he can only leave it up to Dalyra, who is more than capable.

Lucky for Eve, Edward and Elvis. And lucky for Dalyra that there’s soon only one left.

Because today is a special day! 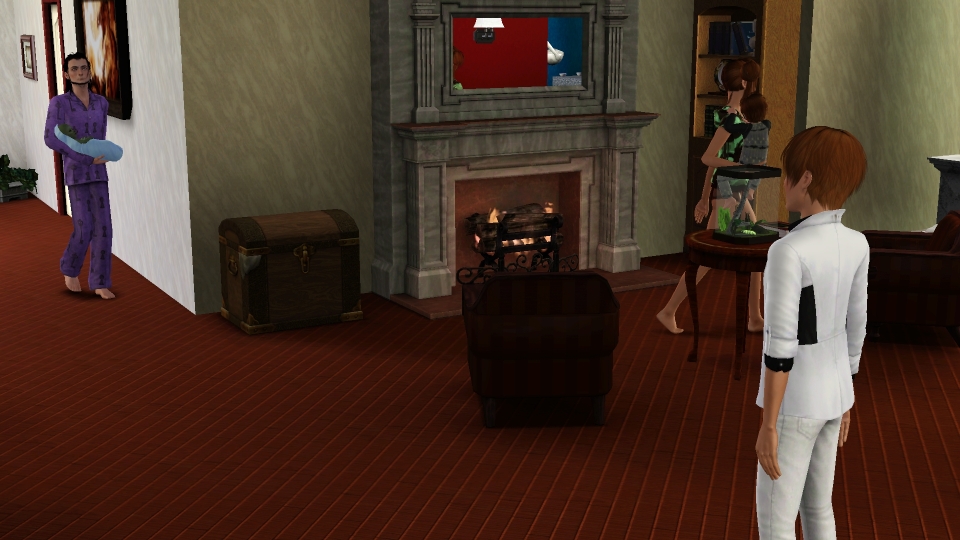 Elrath: Trail of people leaving the nursery with babies. Must be someone’s birthday.

It is indeed Edward’s and Elvis’ birthday.

Elrath choose to cheer for his full-blood brother.

Gan blows his son’s candles while crushing his head in his armpit. 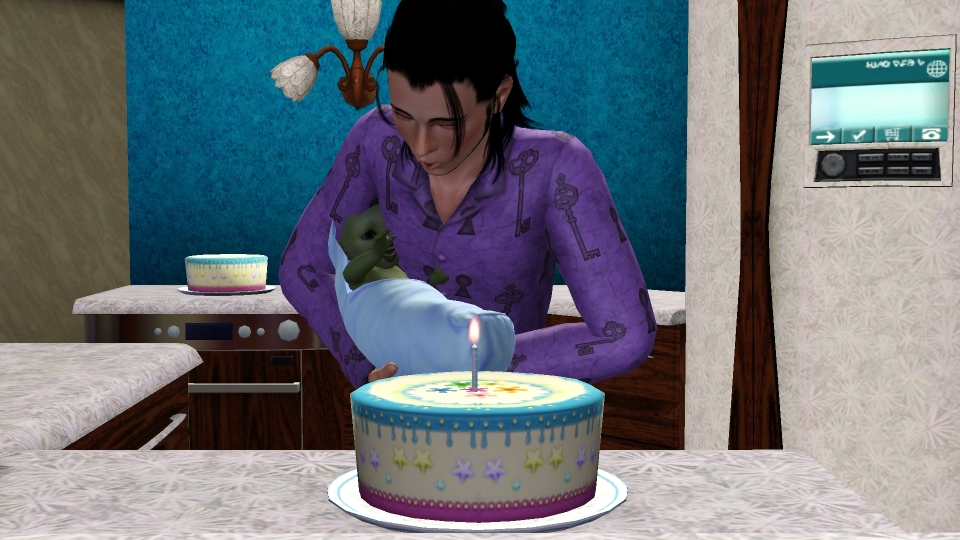 Aliens must have a tough skull since he did not suffer any injury.

Elrath left Edward’s celebration to give some love to Elvis.

Sort of anyway. A tiny bit of support through the wall is all he gets. 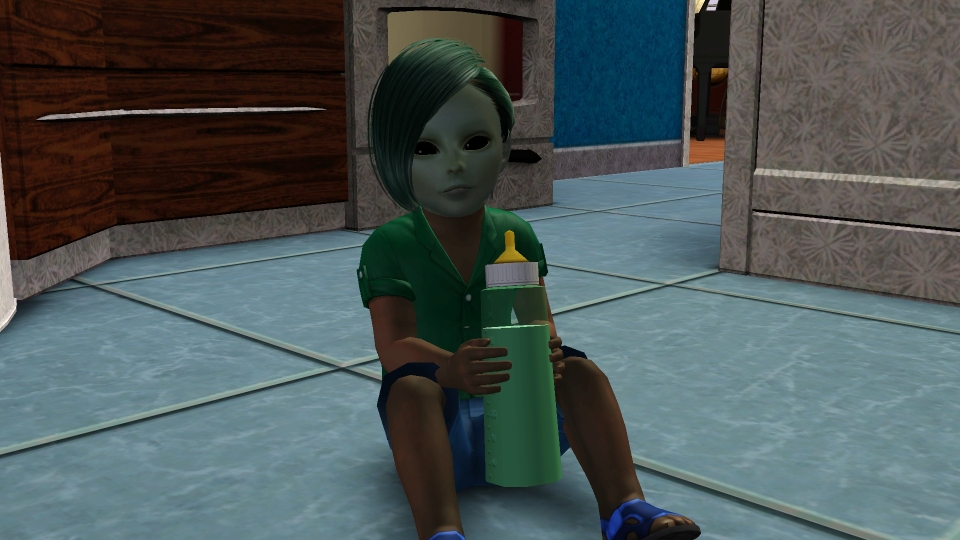 He’s cute, like all toddlers, and gets to keep his green hair because it’s his favorite color. 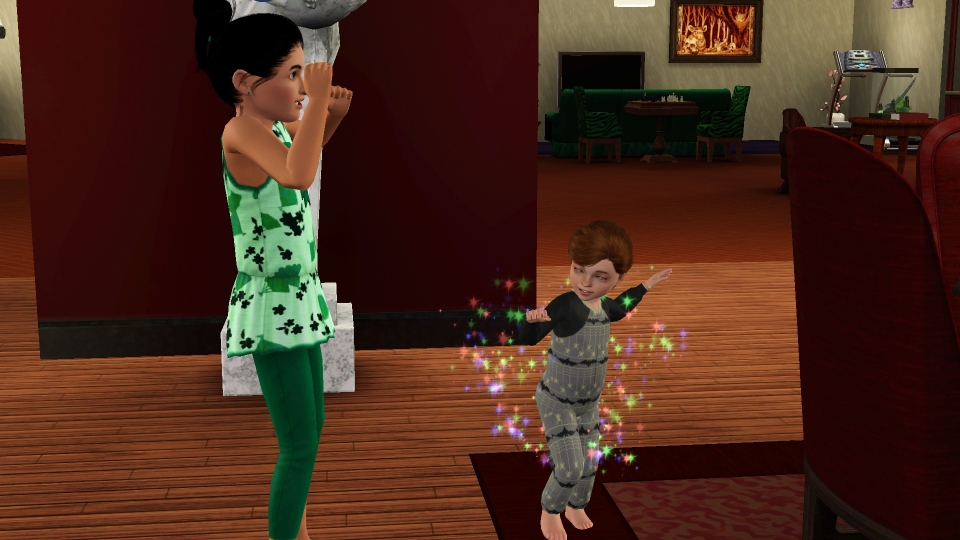 He was only waiting for his evil sister to attend his evil birthday.

He has more Dalyra than Gan into him, but who knows how he will look as a teenager.

Edward’s birthday also means Eve’s since they were born on the same day. Practically twins. 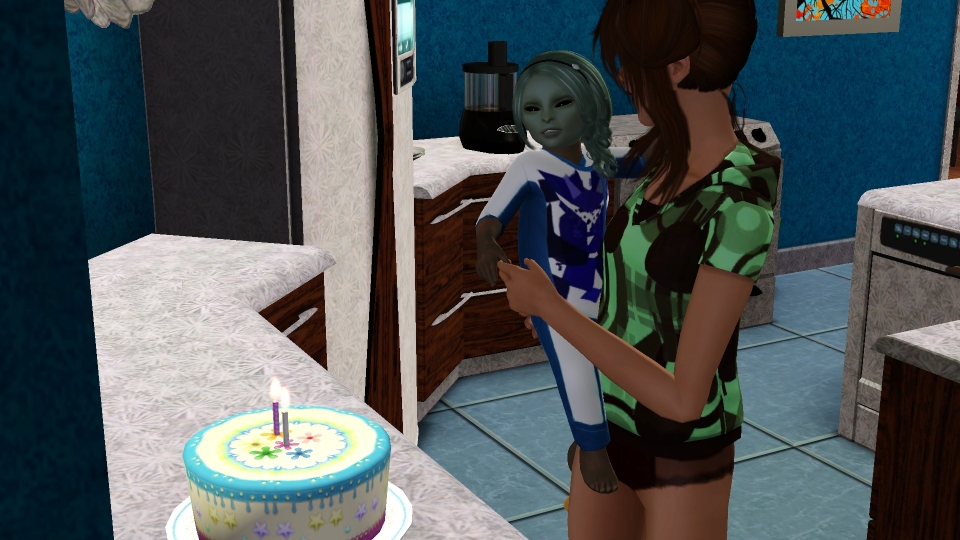 Except they don’t have the same mother, and one is an alien.

Here she is post-makeover. She got some harsher angles now but might grow into them better.

Eve rolled her third trait as Loves the Heat.

All the kids needed a proper bedroom, and this time around, the family is rich enough to not cram them in the same few square feet.

This is Eve’s bedroom, with some sea colors and plants reminiscing a hot climate.

Though Elvis is not a child yet, he still gets his space readied up.

More futuristic for his Eccentric face that will wish for inventions and stuff.

Edward gets a greyish purple bedroom since a plain grey one was hard to imagine. 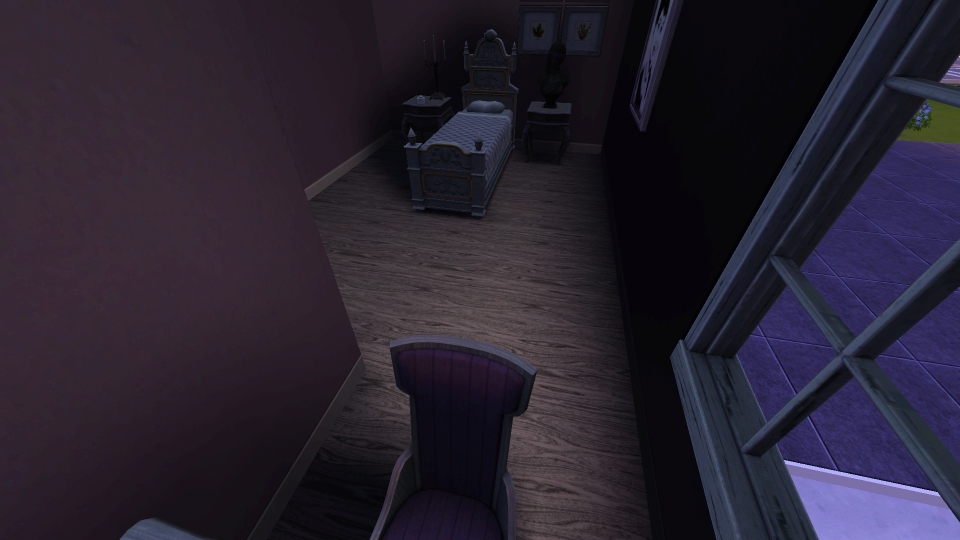 This is the ideal bedroom for evil rituals and sacrifices.

It is also time the family gets another bathroom. The fourth one.

This one is upstairs along with all the kid’s bedroom, so it’s easier for them to get ready for school.

The leftover money is invested into getting a proper living room.

This is quite the upgraded look going from just a couch and TV to this.

There is also a new staircase so no-one gets to the bus too late.

The fireplace area got a small recolor but nothing fancy.

Now that the new part of the house tour is over, back to the kids. 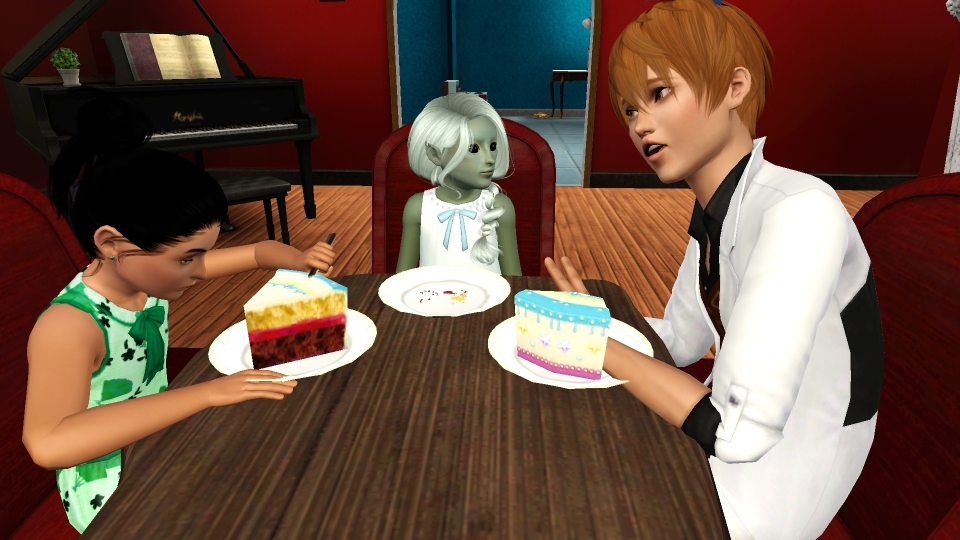 Elrath: Art does deserve a better place in the world but you don’t need to beat people up, sis. You just have to be famous and people will follow you.
Eve: Your hand is in your cake.

When the siblings were done with their cake, Eve wanted to do the dishes while Elrath and Eve wrestled in a corner. 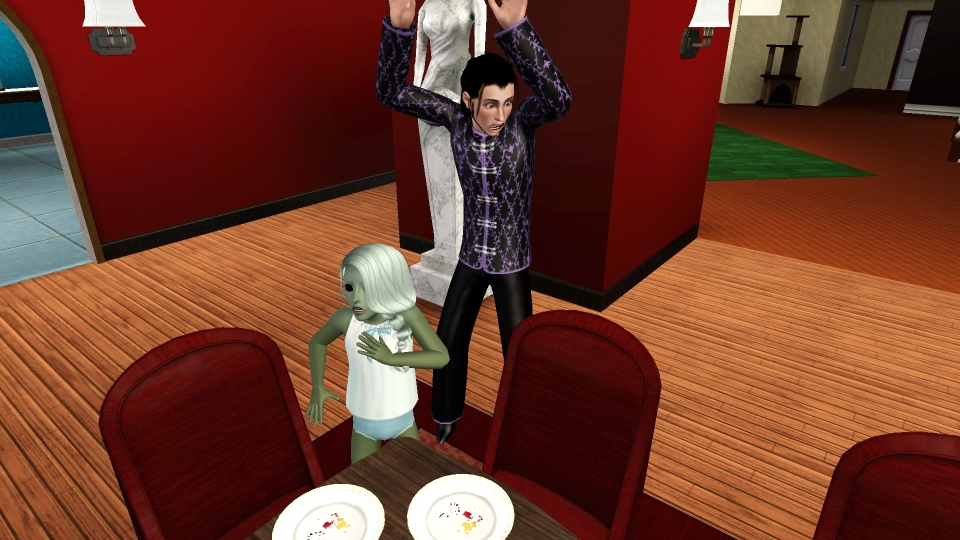 However, Gan had other ideas and decided to scare the wits out of her.

Nice job on making your daughter dislike you, Gan. 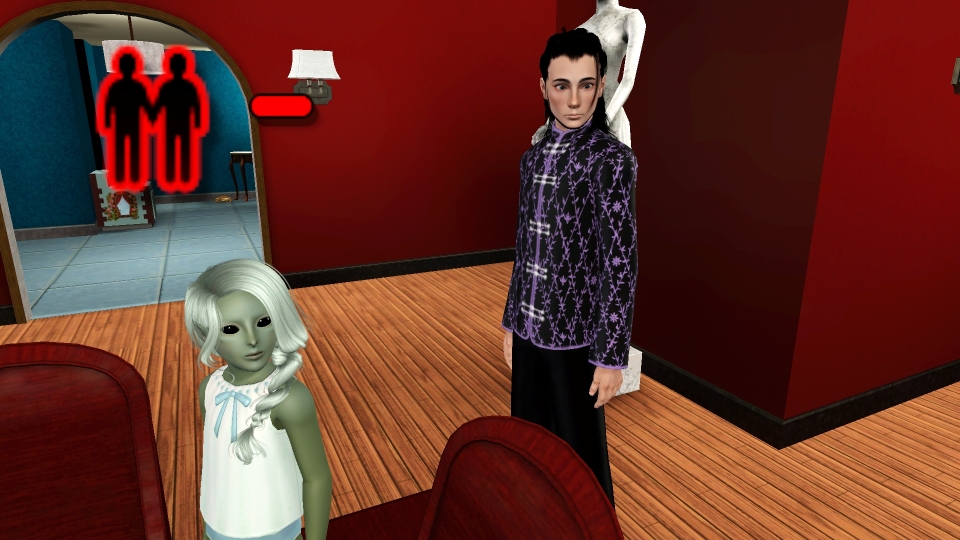 Gan: I’ll make a woman out of you yet!

Poor Eve is ashamed of her father’s ways of teaching her how to be a proper lady. 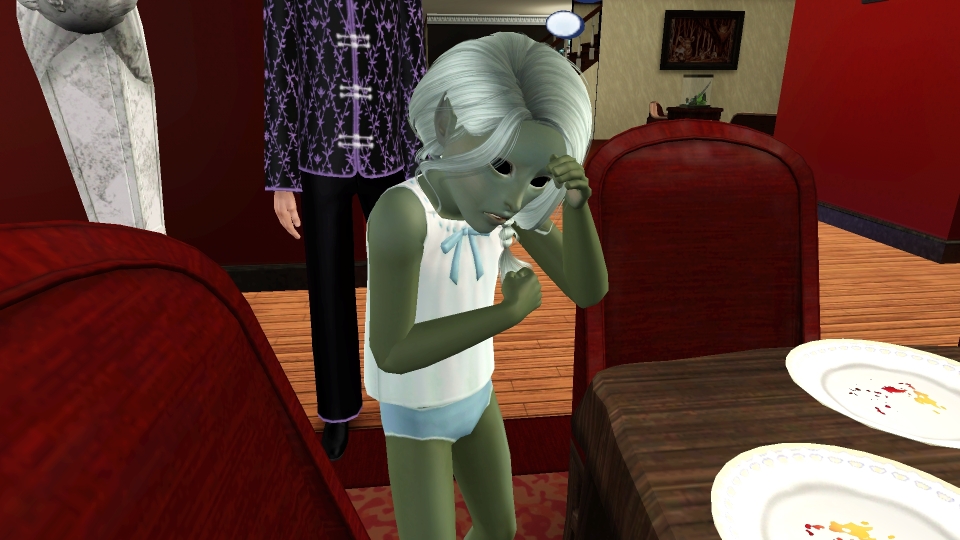 Eve: I never even did anything wrong.

Instead, Elika is the one to pick up couch potato habits despite Eve being the one with the trait.

Elika:  Come on Beaver, show them the art of building dams. BITE THEIR HEADS OFF, GO!

As for Ethan, he still dabbles with dangerous chemicals from time to time.

His focus is so intense it brings out the veins in his arm.

Leaving the kids, and Gan, to their own devices, Dalyra went fishing at the graveyard.

Deathfish were there for her to reap the benefits. And the money,

Ghosts were also there, challenging each other to duels. 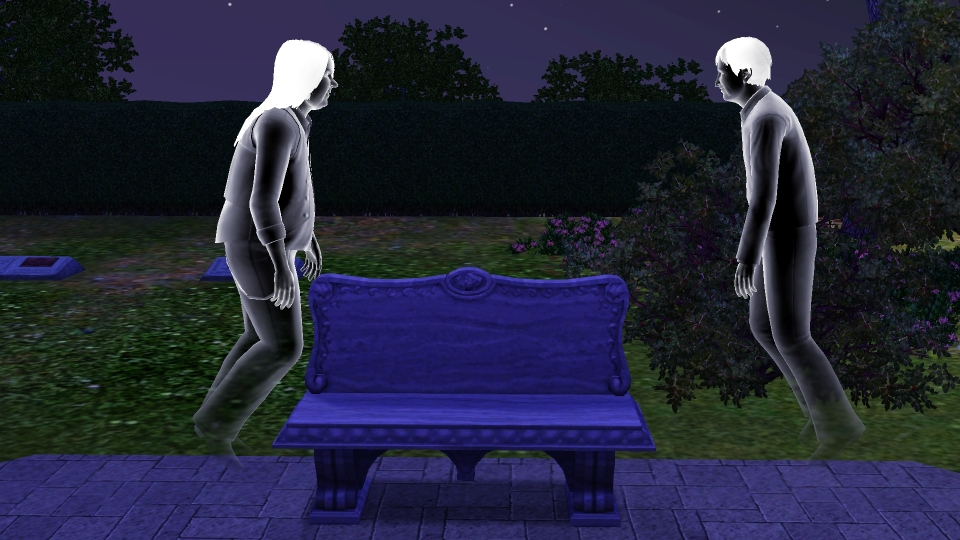 Mr. Landgraab: There isn’t enough benches for both of us around here…

Dalyra returned home in the morning of Leisure day.

Dalyra: Okay, you really reek of a dead’s man fart, but you should learn how to drive.

While Elrath and Dalyra were out for a ride, random people decided to use the family pool.

It appears they’re paying for it, despite having ways of saving themselves.

While Joyce (pigtails) could just help Eleonore (drowning), she just waddled away calmly.

Eleonore: I can’t swim, why did I even come in here?

Joyce ignored her pleas completely while getting to safety herself. 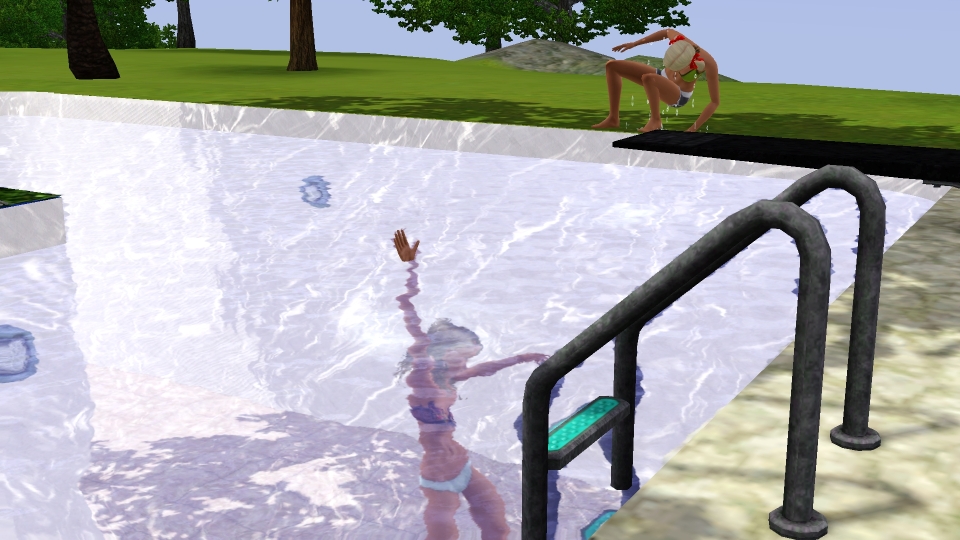 Joyce: You just had to get out girl. It’s not like the pool is walled in or has no ladder.

Grimmy showed up to reap her, beckoning her to her grave.

Eleonore understandably begged to be given another chance. 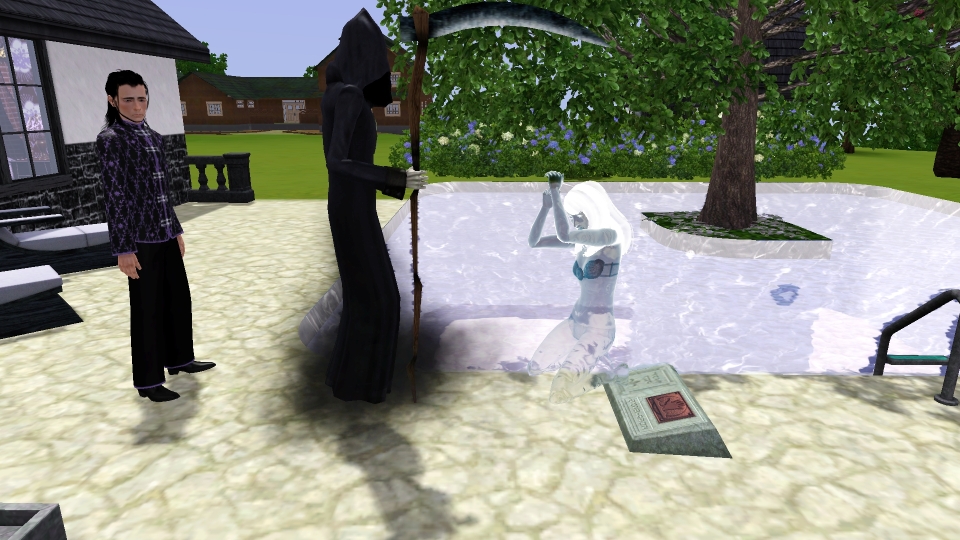 While Gan was still decent enough to see someone’s death as something tragic, Elika laughed her face off.

Elika: Nothing like a good grilled cheese to enjoy after the show.

Both Edward and Eve were too busy socializing to notice anything happened at all.

Edward: If life was a play and I directed it, we’d all be friends. But people would have to be my servitors.

Dalyra and Elrath also missed the devastating death. Once back from driving lessons, Dalyra inquired about something important.

Dalyra: I know you talked about women’s butts for the whole ride, so to be clear you’d tap that?

So yes, Elrath would only tap on women’s butts.

Before all, he prefers people unrelated to him though.

Happy that his mother accepts him and his love for female butts as is, he relaxed with a game of chess…Against nobody.

Elrath: The first move is what leaves a first impression. I can’t mess it up. It’s the key to stardom.

Dalyra relaxed in her own way by taking care of the garden. 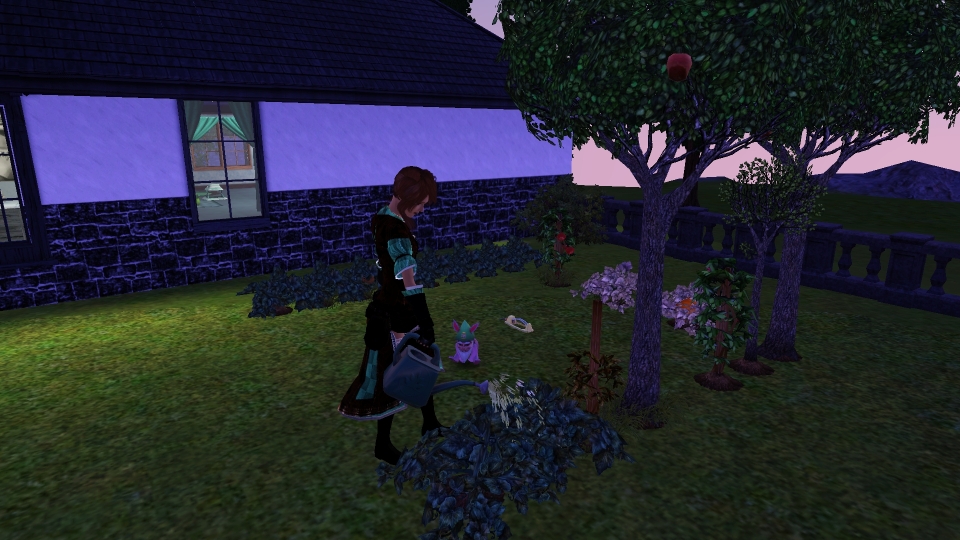 Elrath finished his game of chess and once again proved he gets along super fine with his father. 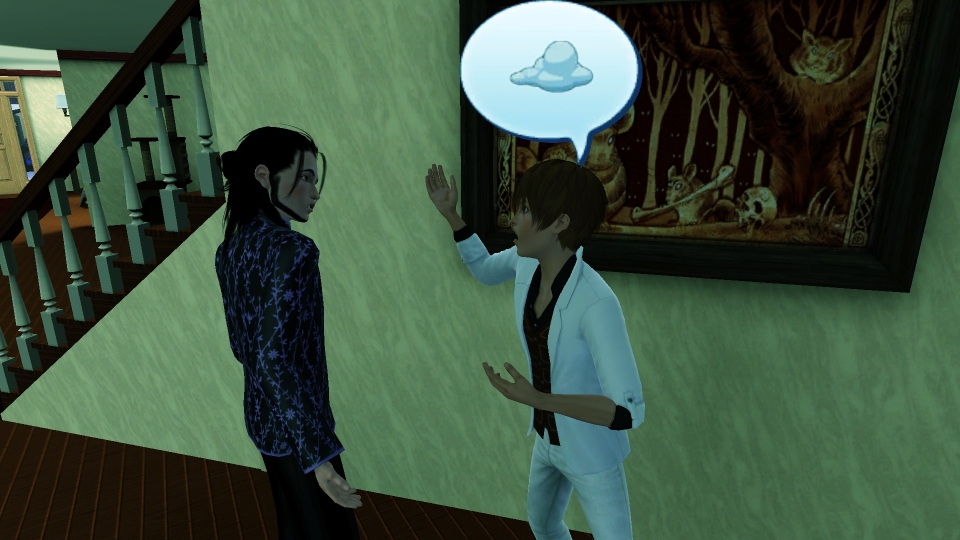 Elrath: What kind of a mystic are you, with your head in the cloud like that all the time?

Gan was offended and wished he had foreseen this moment to give the perfect comeback to his son. 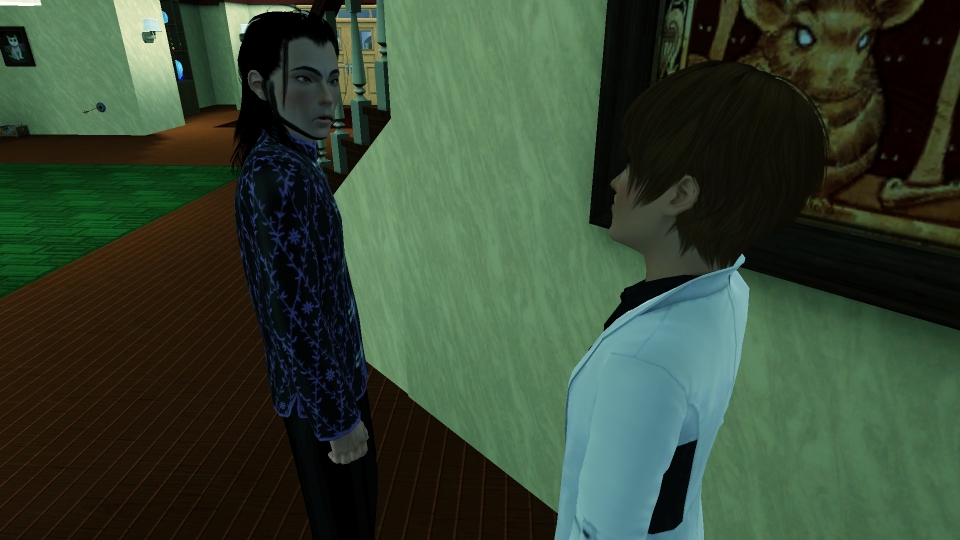 After which he burried his face into a book in shame that he could not find anything better as an insult. 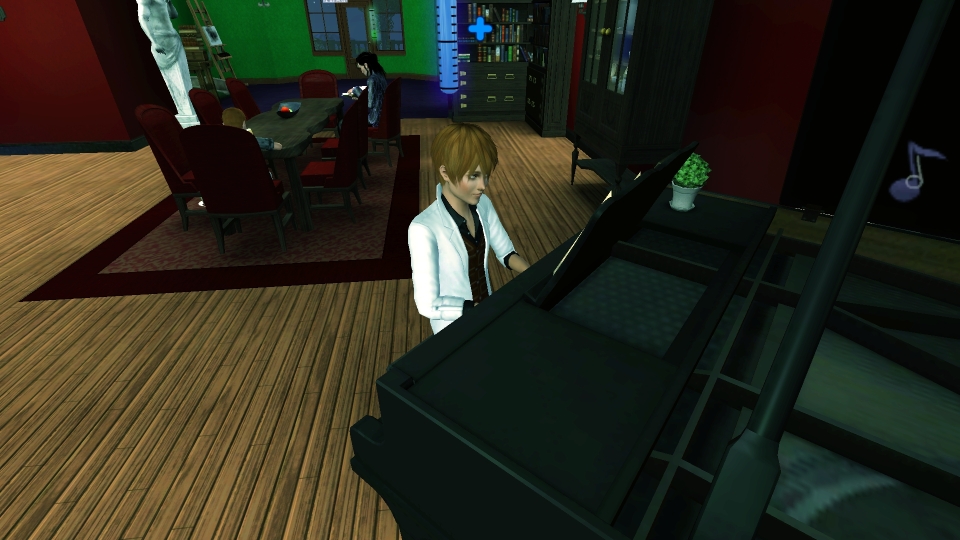 Elrath celebrated his victory by learning how to play piano, much like his mother when she was his age.

Gan still needed to blow up some steam so he went to rage at Bobbi as soon as she showed her face.

Gan: So you thought you could just go and die without my approval?

Luckily she did not mention her long-lost grandson Ethan. 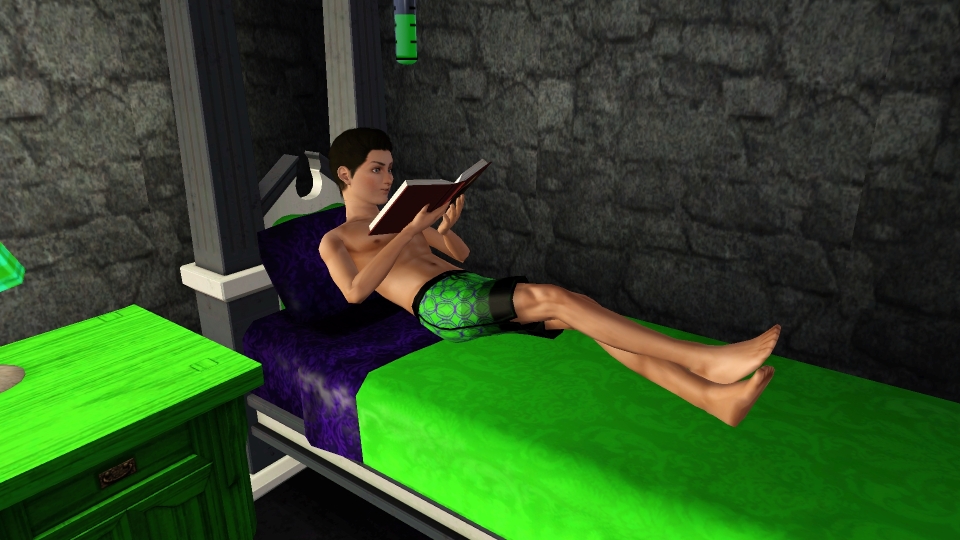 He just reads books in the quiet of the crypt.

Dalyra eventually got word of Elrath’s and Gan’s argument and decided to pick sides.

Dalyra: I had a hard time bringing him here, don’t you dare make him want to go back home. You’re GROUNDED!

She chose the nursery chair for a nap while Elvis learned how to walk.

Elrath also had a nap of his own, right in his bedroom…One foot away from his bed. 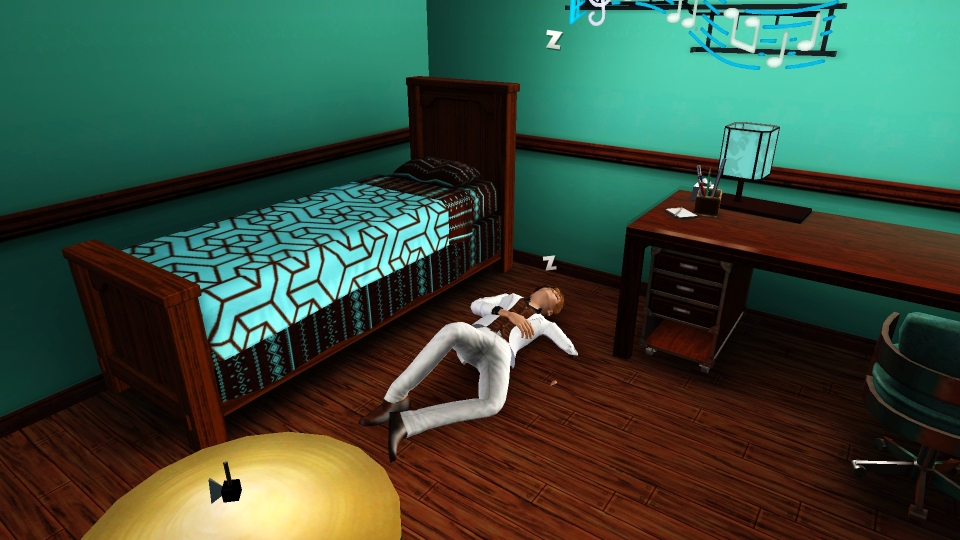 Future is bright for this young man.

Maybe Gan will get to see into the future. One day. Until then, only I know what happens next. Also, Daryl has finally been put up for download.